Filed In The Short Bus 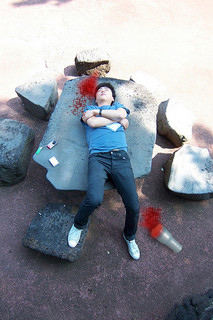 KANSAS CITY 2/18/2015 – A spur of the moment decision likely saved the life of 42 year old Jason Hamglin who police determined acted in self defense.  “I woke up late Saturday morning after a hard night of partying alone on Friday. I looked out my back window and saw one of my Fleshlights was fastened to a tree with bungee cords.” said Hamglin, adding that using his Fleshlights “hands-free” has become a frequent past time – especially when he’s drinking heavily.  “I was like – ‘OH CRAP the neighbors are going to see it’.  So I ran outside and pryed it off the tree.  When I turned around to head back in I noticed a man standing in the bushes peering into the living room window.  He had a handgun in one hand.  He was totally casing my house.”

What happened next Hamglin credits his years as a minor league baseball pitcher to. “I knew I only had one shot and let it rip.” Hamglin threw his best “Fleshlight Fastball”, striking the burgular in the head and killing him instantly.

Hamglin swears he “didn’t mean to kill the guy, I just wanted to knock him out so the cops could come grab him.” A police officer investigating the case informed us the coroner has listed the death as “blunt force trauma” to the head.  He went on to say, “No charges are being pressed in this case, as it appears to be an act of self defense. The Fleshlight had been left outside all night causing it to freeze solid. That poor burgular – it must have felt like being popped in the noggin with a sledge hammer.”

Hop On The Short Bus